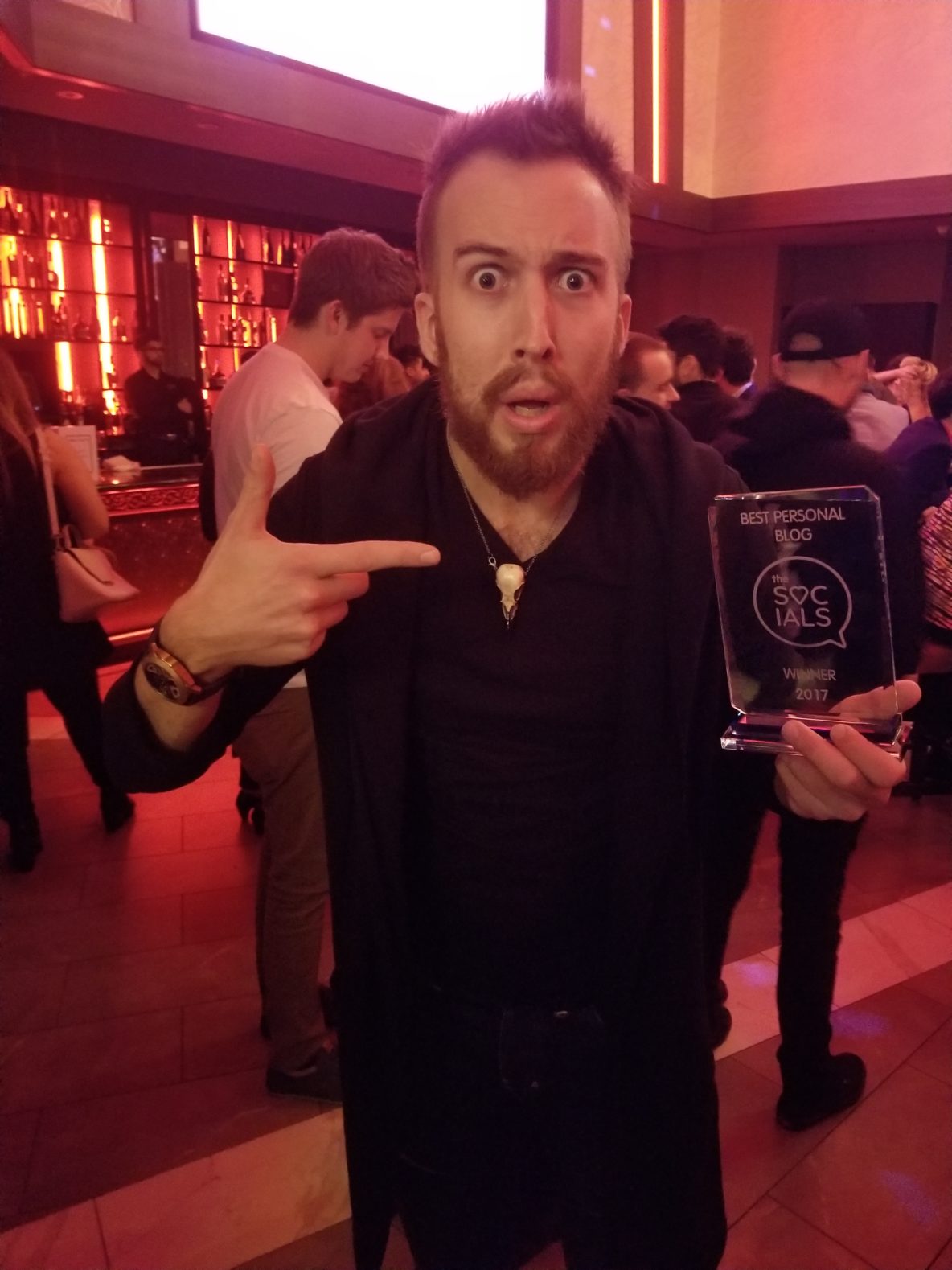 Dear valued readers! We did it!
A couple days ago I won “Best Personal Blog 2017” at the first annual Niagara Socials Awards.

First, in case you missed it, this is directly from the Niagara Socials Award site: “The Socials is introducing its first annual premium award ceremony, celebrating the creators, influencers, businesses, and leaders in the Niagara region.”

There were 9 categories, the description for the Best Personal Blog category reads as follow:

“Niagara is rich in skilled writers and bloggers, but who has the best personal blog? It doesn’t have to be about any topic. The Judges will consider creativity, individuality, community (comments, likes, shares, etc.), content and overall appeal.”

Second, here goes trying to recount some of that night. I walked into the award ceremony on December 4th 2017. The nominees and their guests were invited to Ruth’s Chris Steakhouse in Niagara Falls, On. I arrived late, and alone. Let me explain. I was busy trying to decide what the hell to wear. That’s an outfit most would have probably decided on well in advance, or at least a few hours before heading out the door. Well, not I.

To clarify, let’s go back a few months. The month is October, and I don’t do well at competitions. I really don’t. So you can be damn sure I don’t like award ceremonies, or even the idea of award ceremonies. After all, taking vulnerable truths, ides and thoughts, out of my mind, finger-dancing them onto a website, and then deciding to make them public is one thing. To have the latter judged, rated, voted on and put up against some other incredibly talented people who are also brave (or stupid) enough to share any part of themselves on the wild world wide web is just nerve-wracking. Every once in a while I decide to put my foot in the game of a competition, and most of the time I regret it almost immediately.

Nevertheless, when news came of this new award ceremony, it meant enough to some close friends that my name ended up in the applicants’ pool.

Over a couple weeks, the judges deliberated over the 100+ people who applied.

Eventually, I got an email notifying me of my nomination in the “Best Personal Blog” category. Crazy.

I come here to write from the heart. To share what I’m working on. Ideas that are haunting me. To get stuff out of my head. I didn’t know anyone ever actually read this stuff. Ask me where the metrics of my blog are, and I couldn’t tell you where to start your search. Not because I don’t care. But because it never mattered. Those are two very different things.

Be that as it may, I found myself dreading the ceremony. I told my partner I just wanted to go alone. That the whole thing was stupid. That it’d be a waste of time, and that I would just end up leaving upset, feeling defeated and more tired. I’m a sore loser. Not in a jealous way. I haven’t ever really envied people. It’s just I’m really tough on myself. I have chased excellence in everything I undertake since I was little.

Being an only child to a single-immigrant-parent…I think you’d agree desire to be the best and feel unworthy when told I’m not is textbook really. To enumerate, at least partially, I won my first juggling competition when I was 6 years old – I was up against adults and other kids alike. I won 1st and 2nd places in National and Regional oratory contests, a handful of times – in 3 different languages, between the ages of  10 and 14. Played point-guard on my extra-curricular basketball league in those same years. Placed top 3 in high-jump, sometimes long jump, in the regional championships for most of my of my elementary school years. Back-flipped off a wall for the first time when I was 14, while on the opposite end of the nerd spectrum: a year later I became the youngest licensed amateur radio operator in Ontario, and second youngest in Canada. The accomplishments, achievements, and resulting random talents continue on.

For fear that I am coming off as some bombastic and ostentatious prick. All this to say, I have lost a lot as well. Not just competitions. I have lost people, I’ve lost languages that once came easily, and I have failed a lot. Similarly, I have been told no, a LOT. The disdain for award ceremonies, and competitions came from a longstanding belief that I am not good enough. That I always need to be better. In my angst, I had a fleeting moment of f*$k it, I am good enough.

Consequently, I decided to go to the ceremony just dressed as me.

The way I am dressed now. My favourite dark-denim jeans, my Docs (laden with the Union Jack), my black v-neck, my long robe-like sweater, and Frank (my Raven Skull pendant thing from Raven Ranch).

Half way to the festivities, again, I didn’t feel it was enough. I felt like I needed to be more. So I stopped in one of the most pretentious stores I could think of, asked a style specialist\sales associate for how to make my look a little more “UP”.

Then came this coat. An amazing, John Varvados, long, beautifully rock n’ roll bad-ass coat. The second I had it on, I yelled “YES!” It was brilliant. The perfect thing to make me stand-out. To take me from being the quasi-unique bohemian type, to the level of elevated, quasi-unique bohemian type. I took it off, and looked at the tag…It was $1,992. Needless to say, I didn’t buy it. I made up a valid excuse as to why I wouldn’t walk out with this beautiful and magical two thousand dollar coat – and left that store. Already feeling defeated. Like an under-achiever.

For this reason, I’m so glad I still had half-way to drive before arriving at the awards. It allowed me to listen to the radio, drive, and think. I realized, the coat didn’t matter. Neither did the awards. The goal that night was to walk-into that space, with the feeling of wearing that beautiful coat…it wasn’t imperative I actually have the coat to feel that good. Just needed the feeling. Next, I told myself this would also be a great time to meet new friends. To appreciate others who are doing good, and generating content. People who may also feel like they’re not good enough, and validate them, flatter them, make them feel good.

In the end, I did just that.

I didn’t meet as many new people as I’d hoped. It was a bit clique-y. I got into my head, and instead started to people watch. Which I’ll argue, in my line of work, is as valuable as meeting new people. I stayed towards the back of the room when the awards began. In case I didn’t win the award, and that feeling of confidence and “good-enoughedness” disappeared…I could too. Alas, the first category of the night was mine, and I became the first person to win an award that evening. Amazing, how the quiet guy, in the weird shoes and awkwardly-long black sweater at the back of the room, becomes the most energetic, and enthusiastic person in the room when he sees his name in big letters projected on the wall, and hears his name getting called after “WINNER”.

I was blown away. So excited. So shocked. The Mayor handed me a beautiful glass trophy. There was a photo op. Lastly, I was asked to say a speech. Speech? I didn’t have a speech. Whatever. I spoke from the heart, and got incredible feedback on how much my words inspired and moved others. This made me so grateful. As I walked down the stairs back into the audience, there was a plethora of handshakes, smiles and congratulations. Wow.

Obviously, the truth is I learned a lot about myself. I no longer fear awards ceremonies, or competitions. I have started to add the ability to generate that “AWARD WINNING” feeling when waking up everyday through a moment of mindfulness and self-hypnosis. I’m writing this all here so that if that ability starts to drift, I can come back here, and read how important it is not to let it.

Thank you, all you wonderful friends, fans and folks who support me, believe in me and keep me going.

I’d love if you checked out the new prints available in my online store, or my most viewed blog post!