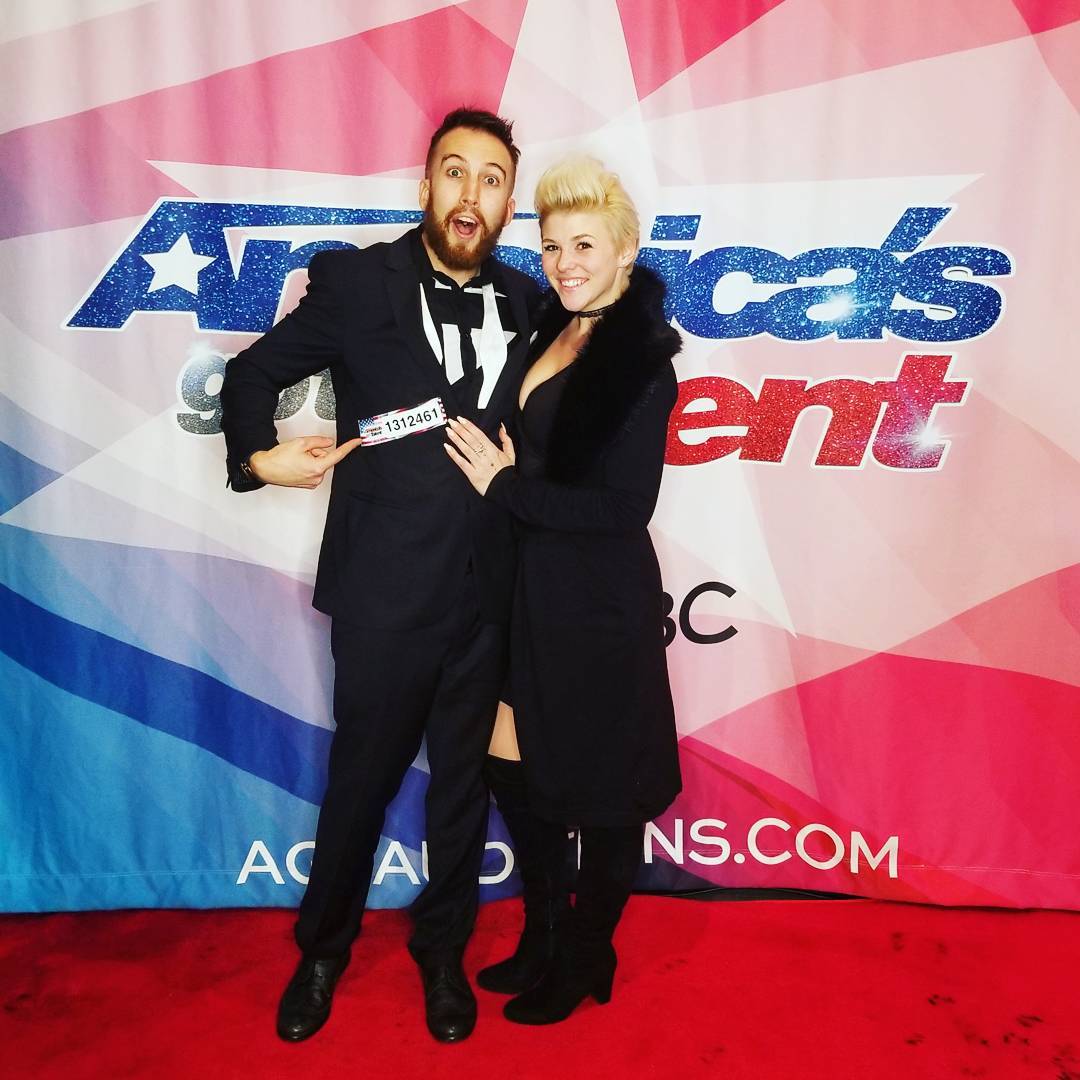 Everything changes when you hear the words “That was great!” from an executive producer at NBCUniversal on the set of an America’s Got Talent audition studio.

In due time, for now, let me begin at the beginning. It was December 7th, 2017. I was performing at my usual Thursday night spot, St.Louis Bar and Grill in St. Catharines, Ontario. It was one of the first really cold nights, the evening was just starting up. The restaurant was still fairly quiet, and slowly starting to fill with patrons anticipating dinner service. I moved to my usual spot in the back corner of the space, hung up my coat, and prepared what I needed to perform. I noticed my client Jim Reaman (the owner) standing near the bar chatting with some staff.

Since I had a few minutes to spare, and genuinely enjoy catching up with Jim, checking-in and so forth, I headed towards him. We quickly moved from talking about personal affairs, to talking about what I’d been working on, my aspirations, and so on. I mentioned an idea that had been floating around my head, like an annoying little balloon. Sometimes it was filled with helium, sometimes with Sulfur Hexaflouride. The idea was light, in that it was clever, fun, inspiring, educational and full of potential for awesome. It was heavy in that it was terrifying, risky, draining, and full of potential for embarrassment, failure and rejection.

To explain, many of the patrons of the various restaurants I perform in on a regular basis would bring up this very popular television show. It is the show that inspired this blog post, it inspired the events in this post, and has gone on to completely change and rewire how I think about everything in my professional world now.

You see, I’d introduce myself, greet the guests, and be invited to perform. I’d start to establish a premise to begin an effect, with hopes to perform something genuinely amazing. But all of the sudden: an overwhelming energy builds in one of the people I’m sitting with, they burst out with some variation of: “Oh my god, did you see that one guy on America’s Got Talent. You know, he was great. I can’t remember his name, but he took…and then he asked the judges to…and then the whole audience…WOW! I still can’t believe it.”

America’s Got Talent. Initially hearing those three words was cute. Then it bothered me. After it was quaint. Eventually it got really annoying. Finally, I settled on feeling fine about it when I realized it was just a way for some people to see me as a little more human. To connect with me. In doing so, to show me they too, are human. When I had this little eureka moment, that when I meet an accountant, or a lawyer, or a baker, or an actor…I too probably say things they’ve heard a thousand times before. My intention not being to annoy them, but to establish a sense of relatability and trust with them.  I digress.

It was just about when I had this eureka, that someone, maybe a couple someones told me: “You should go on America’s Got Talent.”

This brings us back to the moment I’m standing with Jim. In a now slightly more busy restaurant \ bar, getting asked about my goals and aspirations. So being the blabbermouth I am, I let the balloon finally float out of my brain, through my mouth, and form as a little audio-bubble that pops as it reaches Jim’s universe.

It went something like this: “Well, I’m this close Jim.” I held my index and thumb up in a pinching fashion to make the classic gesture of teeny-tiny. “I’m this close to just leaving here after I’m done for the night. Packing a quick bag, grabbing my passport and heading down to New York City for the America’s Got Talent Auditions tomorrow. You know, it’s been sitting on my mind for some time. I looked into it. You don’t even have to be an American citizen. It could be a great opportunity. But it’s a bit of a long drive. It’s an expensive city to book a hotel in so last minute. I don’t even know what I’d show them.”

As soon as the words left my mouth, Jim did what any great businessman, and any great friend does. He listened. I remember he paused for a moment. He didn’t disagree with me right away. In fact, he took my side. Even argued from it for a few beats. Then adding how his daughter Ashley had gone to New York for a modelling competition, (a few years before buying the restaurant when Jim was still working solely full-time in construction) and how many hours he would have had to have worked a heavy, labor intensive job – to afford her sleeping 8 or 9 hours before the competition.

I smirked at this image, a dad, working his ass off, getting sweaty, dirty, muddy, and just outright tired, while his young, beautiful 18 year-old reaped the benefits of his efforts: literally beauty-sleeping away the strenuously earned moolah.

After, I even remember adding that after mentioning the idea to a close-friend: one who’s opinion and advice I held in high regard, told me not to bother this year. He said there would always be another season, another year, another chance. I shrugged my shoulders, excused myself, and stepped away for a moment to grab a sip of water which I’d left by my coat. When I came back, something prompted me to pull out my phone, and pull up the official America’s Got Talent Auditions website. It may have been something Jim said, or something that naturally evolved from picking up where the conversation was left off.

Usually, I have a pretty good head for remembering names, numbers, dates, etc. Turns out, I was really wrong. The auditions in NYC weren’t the next day, they weren’t even on a Friday. They weren’t until the following Sunday: December 17th, 2017. We both kind of paused, and looked at each other. I smiled, got a little nervous. I think a little because I was now about 15 minutes past my contracted starting time, and eager to do the job I was hired to do. It’s always nice to be able to show and refresh my clients mind on the value I provide. Between the obvious reactions, to the entire interaction, the hospitality points and finally relationship that is built in the time spent with guests.

I think I was also nervous, because that little semi-bouyant-idea-balloon just became a whole lot of reality that popped loudly, but subtly.

From time to time, I approach patrons sitting alone at the bar, to engage them in what it is I do. More often then not, these patrons are male. They’re sitting at the bar, because they want to be kept company by an attractive female bartender, because they’re watching sports, or because they just need some alone time, in the company of their favorite libation to unwind. Usually, they’re unresponsive to an athletic, has-his-shit-together type, and slightly quirky-looking male counterpart offering to do some entertainment. I never approach anyone with that attitude, I just know never to take it personally if I’m not invited to share my work. Brian was different.

Brian was a stocky, decently dressed, clean-shaven, but definitely had some life-experience, rough around the edges type of guy. Sitting at the bar. Near where Jim and I were just chatting. Having a pint. His physical proximity to us in the space, made it easy for me to break away from the conversation fairly naturally, in saying: “Let me get to work, and do what you’re paying me to be here for.” I approached Brian, introduced myself, welcomed him, and offered to do some of what I do. He agreed. He didn’t seem overly enthusiastic or energetic about it, nevertheless I was quite pleased.

In the same way that I think people tend to talk more when they’re around people they’re comfortable with. Sensing Brian’s slight hesitation, I paused my need-to-perform agenda, to find out more about Brian.

Turns out he was an avid poker player, and frequently played in high-stakes, private poker games. I made sure to tailor my effects for him, to that which gained me some attention and notoriety in the casino official and gambling circles.

Within a few minutes, I noticed Brian’s gentle warmth and that childlike sense of wonder and play come out. At the end of a rather dazzling gambling demonstration,  Brian asked me some standard questions, from how long I’d been doing it, to if it was my full-time thing, and then said the beautiful words “Do you use strictly cards?” I asked him for 3 toonies, and began a classic routine that I’ve come to love and rely on often.

By the end of the last routine with playing cards, the general manager, a couple service staff and Jim gathered opposite Brian and I (on the service side of the bar). They were still there when I began the effect using three two-dollar coins. In short, the three coins travel invisibly, disappearing one by one from my hands and end up in Brians’. For the last one, he is asked to clasp his hands together, with two toonies in them, and await the impossible arrival of the third. Of course, under these test conditions, the coin never makes it. I am slightly embarrassed and puzzled. Eventually, I reveal that I know where I went wrong. I ask Brian to turn over his hand, and the third coin is seen somehow, to be perfectly nested, under the face of his watch. Brian freaked out. As did everyone else. Laughter, some profanities, and big smiles ensued.

By and large, it felt nice to lead someone through a powerful experience of the impossible. It was a nice touch to have Jim there to witness it firsthand. It was really great to hear the comments, praise and promised return from Brian. I eventually left, and wandered over to other guests, doing my thing.

Around 20 minutes after finishing with Brian,

Jim asked to speak with me privately.

He walked me into the vestibule of the restaurant, near the entrance-way. Handed me an envelope and said “Kid, listen. You gotta go. This isn’t your pay. You still need to get paid for tonight. This is to help with the expense of the trip. You’ve got what it takes. I’ve always seen that. In my gut this just feels right. I know money can be an issue. But if you get down there, and you need more. Just call. Just go down. See what happens. If it’s nothing. Then so what. At least you went. Ashley ended up taking second place, it was her first modelling competition, and she came 2nd nationally. You never know until you try.”

In essence, I just got steered into one of the most incredible, adventure-filled, life-changing, dramatic, extraneous, and beautiful moments of my newly revamped career, in the most poetic, charming, polite and peppy ways I could dream of. The envelope contained a check. The money was good. What the money did, was underline the bottom line. The bottom line was, there was no smoke being blown anywhere. Here was a client, who not only pays me a substantial wage, week after week. Who not only treats me with professional respect, allowing me to work alongside a full corporate marketing team to help design posters to promote our weekly table-side events. Who not only includes a meal and drink on top of the agreed upon fee. A client, who is speaking to me as a friend, as a mentor, as a worker, a parent, a sage – telling me, to get out of my bubble. To do something daring. He took a pen, metaphorically underlining, and then physically signing just how much he thought me trying at this ridiculous yet wonderful thing, was worth.