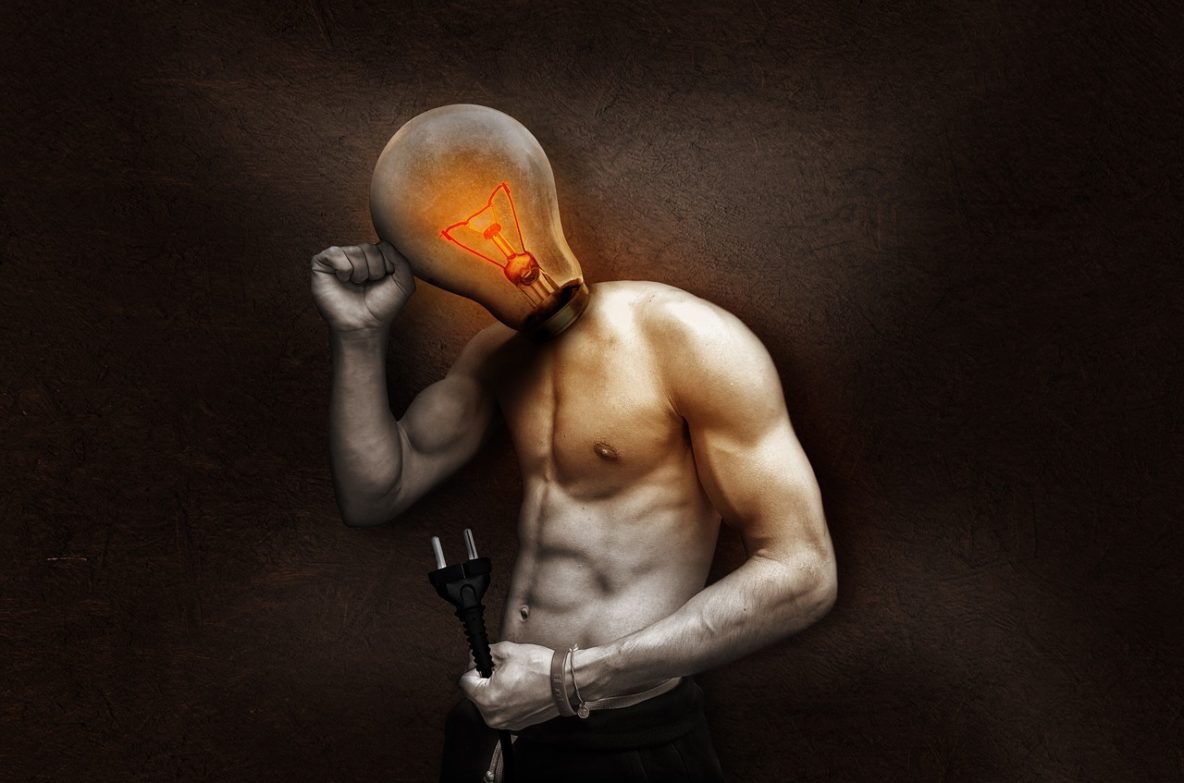 “Is it possible for humans to create something completely novel and new that is based on nothing that previously existed – Or is human creativity just rearranging and building on previous ideas?”¹

To summarize my last post, I had a little over a week to come up with an effect to do in front of the first (and potentially last) person I’d be auditioning for from the NBC team in NYC. If I magnified and examined some of the seemingly small and insignificant  processes in the 9 days leading-up to our departure for New York City: the opening question (in bold font above) reveals itself as one of many esoteric and philosophical ones that arose.  That was a really fluffy way of saying: I had no ideas! What I was going to do?

I tried to figure out something that would be good enough, and in doing so, I discovered so much about my art and more importantly about myself as a performer and as a person. If you’re short on time, you’ve just consumed the gist of this post. If time is not your enemy today, please continue.

In order to continue without leaving you, my wonderfully wanton word-pluckers completely bewildered, let me clarify some potentially harmful ideas right away! When you register to audition for a show like America’s Got Talent, you don’t go directly in-front of the celebrity judges, and appear on television! Oh good heavens – Did that unannounced spoiler of TV-Magic just leave you completely saddened and shocked?
No?
Good – I hoped not. If it did in fact come as a surprise, forgive my sudden bursting of your bliss-bubble.

It means a lot that you are taking some time to understand the process I somewhat impulsively decided to sign-up for. As lengthy and incrementally arduous as it may seem, you are no doubt already aware of the rewards implied with its completion.

For this reason, I wanted to know exactly what I was coming up against – so research is how I spent the first couple of days of the 9 days leading up to the journey.

1. But Alex, aren’t you Canadian..trying out for a show called “America’s Got Talent”?

Well, it turns out you don’t have to be American to audition. You just have to be in America legally at the time of your audition.

2. Register on the AGT Audition website, and you become a contestant.

This lets you:
a) Submit a 2-3 minute video clip of your talent \ act online;
b) Appear in-person at one of the cities hosting auditions;
c) Do both A & B

3. If you choose to audition in one of the cities hosting live-auditions you should expect to:

a) Arrive to the venue early (7 AM is best) to clear security and register.
b) Dress Well and have a government issued I.D. with you.
c) Bring friends, but not so many that it’s annoying.
d) Absolutely not have any fire, pyrotechnics, weapons, or rigging of any kind at this stage of the process.
e) Bring food and water, because it’s likely to be a long day, with lots of waiting.
f) You have 90 seconds to show off your talent.

You are now caught up, and know exactly as much as I did. Perhaps more, in that you know that if I’m writing about it now, it’s because I didn’t die of a heart attack or suffer from some other horrendous unknowable circumstances prior to performing.

For fear that I have jumped around a bit in terms of topic and minutiae, let’s go back to where we left off. I was just handed a check. I spent 2 days doing some research, and registering on the AGT Auditions website. To increase my odds of getting someone’s attention, I decided I would both submit a video audition, and show up. After all, Woody Allen said “80 percent of success is showing up”.

To begin with, let’s briefly talk about the video I ended up sending before leaving for NYC. The video hasn’t been brought up to me since I submitted it, by either the public, or any employees of NBC. So we needn’t spend too much time on it, because quite frankly, it wasn’t that great. I sat there for days, thinking about ideas.

What can I show these people that they not only, haven’t seen before, but could actually stand watching for longer than a couple seconds?

Keep in mind, entire teams of employees, designated to going through all the material submitted electronically exist.  These are probably teams made up of mostly of production assistants, interns, and maybe a couple producers. Each of them responding to a higher-level producer. On the very unlikely chance it’s something or someone absolutely incredible – I’m talking jaw-dropping, next-level, could-be-the-basis-of-a-new-religion type of stuff…then maybe, just maybe an executive producer gets a video forwarded to their inbox. That or they are unbelievably awful.

Personally, of all the ideas I germinated upon, the best I could come up with at the time would use croissant dough, two coins, a couple strips of duct tape, a leopard sleeping mask, and a car. I decided I was going to drive blindfolded. My girlfriend would film the experience, and we’ll go through a drive-thru…a Tim Horton’s…just to show off just how very Canadian we are?

So December 11th, we began the video with my getting out of the trunk of my car, shoving balls of dough in my eyes, and putting coins over top of the dough. Duct tape fastened the lot to my face, and then I covered the lot with a sleep mask, just in case someone thought I could see through dough, coins and duct tape. Off we went. The entire journey took less than 10 minutes. Remember, the final clip was supposed to be no longer than 3.  Thus, on December 12th 2018, I trimmed it down to size, added a quick opening clip of me breathing fire, and a title screen with my contact information at the end of it. Trying on dough, coins, duct tape and sleep mask before the drive.

Fortunately, (on the basis of some forms I autographed) I can’t show you the clip I submitted, even if you wanted to watch it.

I have to say, re-watching it – I realize just how many mistakes there are, and how I wish I’d spent a little longer working to make it better. Forgiving the technical elements that I ignored – the sheer lack of theatricality, showmanship, scripting, and drama in what could (and should) have been a very dramatic and exciting moment of absolute mystery – is embarrassing. It just seems to drone-on.

The whole thing just became a kind of morose and uneventful conjuring puzzle to solve.

I use the word effect quite often. Allow me to clarify its meaning in this context, as it will allow you to better digest some of my current and future ideas. In short, if a larger percentage of your mind is left asking “how did you do that” rather than enjoying the ride of the experience given to you by the plot and resulting mystery, then it is not an effect, or an illusion: It is a trick, a mere puzzle to solve. In this case, the puzzle is  “How can he be driving, if he can’t see?” This imaginably could easily be remedied by my telling you the truth. Revealing the answer.

Yet as is too often the case in magic: learning the truth leaves you feeling kind of empty and let down. Because the solution, is normally less than we’d hoped for in terms of complexity and impossibility. So in telling you how I did it, I hope you’ll see me less as an incompetent performer based on that video, and more as a bit of an impulsive and unprepared ass.

The truth is I couldn’t really see…and then I really couldn’t see. Make of that what you will.

Surprisingly, there were only two moments that really stood out to me, (ones that I eventually included in the video I submitted). One was when I asked my girlfriend: “Elycia is it safe to go?” To which she laughed nervously, and responded “Yes?”. Her voice quivering almost as much as mine. Second was the uncanny reaction of the staff in the Tim Horton’s. When I arrived to their place of work blindfolded, pulling gunk off my eyes, and then paying with the coins that were in the dough.

Despite my rather critical outlook on the drive, and hindsight being 20\20. I learned a lot from that experience. Mainly, that I am very much a live-performer, and I do best come ideas of theatricality, showmanship, and drama – when I have a live audience in front of me. (A sort-of instant feedback loop.) I spent a lot of years training in improv and acting. Teachings from that world like: “The most important person on stage is your scene-partner”, as well as: “all acting is reacting” and: “Just remember: Yes and…Yes and…Yes and!” kept resonating in my mind. I also remembered that I need to stick to what I know. So much went wrong behind-the-scenes, and on the front lines, during that drive, it reminded me to not try and learn something new in less than a week.

My close friend Danny Zzzz gave me that advice when I was about 15 years old. It was a few days before one of my biggest and highest paying bookings. I had grandiose ideas on how to change every effect in my set. I called Dan for feedback. He said: “Kid, I know your first instinct is to do everything new, and fresh and exciting. I’m going to tell you right now, keep everything the way it is. You got hired because of what you do not because of what you could do.” How right he was, and how very right he still is.