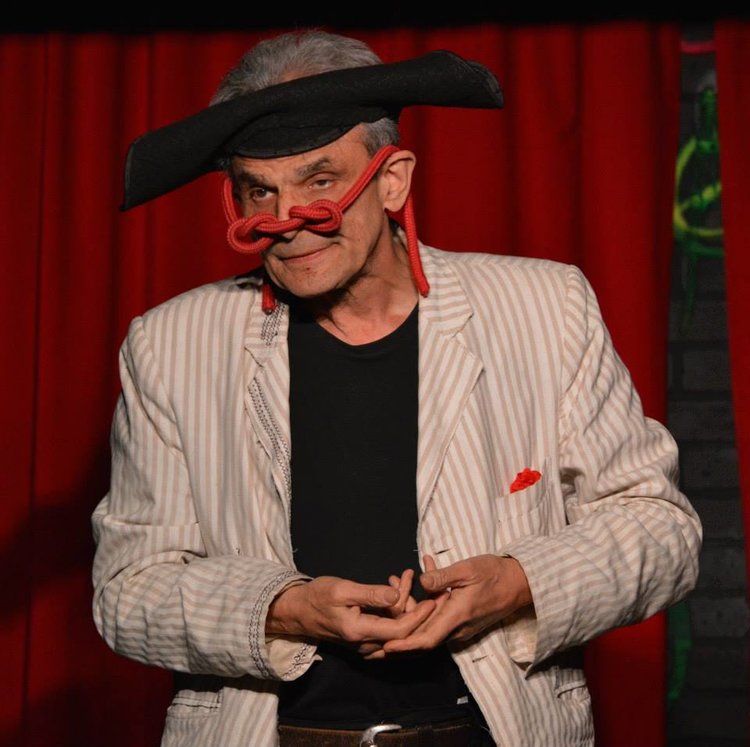 What would you do in 90 seconds to prove you’re worth being on National Television?

Accordingly, I tried to get ideas of potential effects down on paper. In front of me right now, is the mid-sized, slightly tattered black Moleskin, I keep my daily logs in. I flipped to December 12th 2017, here is that day: The arrows list a handful of effects. Ones that I thought would be different enough, yet automatic enough for me. Effects that would allow me to focus on my performance, and still make a decent impression in terms of awe and wonder.

Please notice what fills the top and bottom portions of that page.

In case you can’t read my time-traveling-alien writing, up top it says: Persona, charisma, likeability, uniqueness, comedy. (If memory serves me well, I was just writing the key common points of the acts I’d seen on AGT, that I liked and remembered.)

At the bottom, it says: “If I get excited, people will..” and

(Which turns out to be a Timothy Leary quote, that I think one of my friends on facebook posted. I rather liked it, so I jotted it down.)

What is important to realize is that this definitely wasn’t a ready-fire-aim style process.

It was more a process akin to: Which one’s the trigger again? What would I like the target to be? How much ammunition is too much ammunition? Is there going to be an audience at the shooting gallery? What exactly am I using as ammunition? What kind of gun? How is the wind today? Why am I bothering to shoot? In this case, the overabundance of gun-talk is my feeble attempt at a metaphor for what was racing through my mind in trying to come up with potential effects. Forgive me, I clearly spent too much time in the USA.

The process of coming up with something fast, fun and easy was anything but. It was tedious, slow, and it consumed my life. Keep in mind, with all this going on I was still trying to get back to clients who may have had last minute booking requests, changes, and so forth. Christmas was just a couple weeks away. Presents and shopping you say? To that I would have said: “No – sorry, I’m busy getting a tight 90 seconds together.”

After sending the video of the blindfold drive, I called to set-up a meeting with my friend Paul Wildbaum. Outside of being a buddy, and fellow performer, Paul is a teacher, consultant and writer for me.  Get ready to read and hear that name more frequently as we dive deeper into this journey together. Paul is 67. He is about 5 foot 6, and way more fiery than you’d ever expect. He also has an uncanny amount of flexibility in his legs and hips. His full bio is here.

I can comfortably compare my sessions with Paul to that of Mr. Miyagi and Daniel-San’s in Karate Kid…

Honestly, the universe created in that film isn’t a far stretch from our reality.

We met on Wednesday December 13th.  We sat at an empty table in a vacant lounge at Paul’s residence. In that same lounge there is a small stage, with curtains, lighting, wings, the whole nine yards. With Paul, the usual social trivialities fall by the wayside, and are over within a few brief instances. The conversation quickly turns from hey-how-are-you’s to the work. It is so wonderfully cold, refreshing, and not to mention useful. Fully prepared and completely aware of what we had to do, Paul opened with:

The unpreparedness, the fear, combined with the insignificance I felt the moment I had to reply to that question – was what led to that single question being engraved in my head from that moment on. It isn’t really a question, is it? I mean sure, Paul was asking which effects or bits of business I’d likely go with. However, it is so much more than that. That question, in many ways, is a statement.

Let me explain, I have faced that question before: from casting agents, and clients, to people willing to watch me perform in a restaurant. It is literally a statement, presenting a hidden opportunity. It is another person saying: “I’m giving you the spotlight, and I’m giving you my time. Please tell me you have something worthy of it. More importantly, show me that it’s that and more!”

I replied with the 10 effects I use most in my professional close-up repertoire, along with the list I made in my journal (pictured earlier). Though they are quite strong, the two of us quickly eliminated them all, for none of them met the criteria. They were either way too long, too mainstream (meaning someone else had already performed something similar on TV), used fire, or a combination of the three. I was stuck, and couldn’t believe it. I just needed something short enough that they’d be hooked at the beginning and stay till the end, and original enough that they’d remember me.

How was I making a living at this whole performing arts thing, when I couldn’t find any effects within my repertoire that was good enough to get the attention of someone representing a television network?

Paul was being a huge help, we were about an hour into bouncing ideas off each other. He was in the middle of a thought, and I will never forget how rudely I cut-him off, when something he mentioned sparked the tiniest glint of an inspiration. It quickly left my lips, exploding into a tangible though not fully ripe idea-baby. I finished my thought, and for the first time (I think ever) Paul replied with: “I like that”. Usually, the ideas I propose to Paul are quickly dismissed on the very fair grounds of either being out of my reach, not lateral enough, or both.

We spent the next 2 hours together, dismantling and then remounting this inchoate little mystery adding justifications, context, and comedic accents so that it could become its own little 90-second story arch. It was so nice to have something tangible, that I could begin testing, and re-testing, for a few days. I was excited, as the effect we came up with let me be personable, comedic, a little cheeky and yet still retain an air of professionalism, and control, while slightly rebelling against one of the traditional images of class, thus challenging the status quo.

Equally exciting was the fact that it wasn’t a card trick!

Ordinarily, I’d be describing the entire sequence for you, hoping to illustrate just how awesome it really is. Due to the fact that I don’t wish to spoil anything for you, should you find yourself watching me perform it, be it on television or elsewhere. Combined with the quickly rising rate of legal documents that  bear my name, I’d probably be wise to leave the more tantalizing and intimate details in the darkness for now.

For the 3 days left leading up to the trip down to New York, I swore to only perform that 90-second piece along with two other effects I decided to bring with me in case I was asked: “What else you got?” This is exactly what I did. Almost every table of guests I encountered from December 14th to 16th inclusively, was greeted, and treated much in the same way the first person I’d end up performing for in NYC would be.

Over the course of 72 hours, roughly 40 groups of people (ranging from 2 to 12 individuals) acted as my imaginary celebrity-judges.

It was December 16th, I woke up around 10:30 AM. I did some final errands, and headed to my Saturday evening residency: the Forty Public House. I finished there, drove to Ancaster to perform for a client’s private house party. Finished my 75 minute parlor act, and (since these clients had booked me once before, a couple years prior) as a special after-thought, I shared my plan to drive to NYC, and audition for the show. I asked if they’d like to see what I planned on doing for the producer auditions – they agreed. What followed was an even more condensed version, (roughly 50 seconds) of the total 90 second piece. They were floored, overjoyed, and complimented me immensely. They left me feeling reassured how much fun the whole process would be, regardless of the outcome.

I left their home, drove south, stopping in St. Catharines, to unpack then repack my vehicle respectively, and scoop-up Elycia. We were on the road by Sunday, December 17th, at 12:07 AM.