What would you wake up and do everyday for the rest of your life; even if you weren’t getting paid to do it?

In an earlier post, I shared one of the first things I learned from performing magic for millionaires. In a few words, it was the importance of being generous.  With that in mind (and as promised in that post) here’s a look at the second lesson I got from hanging out with some particularly pecunious people. 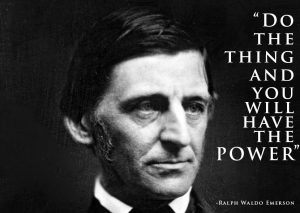 2. Do Whatever it Takes

There are literally hundreds of thousands of blogs on the internet, dedicated to helping people figure out what it is they ought to be doing with their life. Helping to answer the big questions of life like:

If I haven’t launched you into some subjective identity nightmare, I will assume you’re not struggling with these big questions right now, and you’ve decided to read on. Well, this is where any one of the most wealthy people I’ve met would stop me to say something like: “What are you waiting for? Stop wasting your time. Go do that thing.” (In case you’re one of those wealthy people, reading this now, to you I say: Thank you, and here I am: doing my thing.)

Inasmuch as you know where it is you’re heading, you’re already on your way there.
I promise.

Even if it doesn’t feel like it. Consider this: there are people who aren’t even asking themselves whether the path they’re on is one they want to be on. Never mind asking where it’s leading them to. If you already have a faint idea of where you’re going, now you just have to start heading  there. It sounds so simple. It sounds almost too simple. It is that simple.

For one thing, as I mentioned in Which Wolf is it Mister Time, Peter Drucker (a man who’s been called the father of modern management) once said: “What gets measured gets managed.” I think this quote comes up for me frequently, because it applies in so many different areas of my life. Like yours, my life has taken me to some wonderfully exciting highs, as well as some terrific lows. I’ve taken solace in realizing, that being able to consciously consider  my position is a wonderful position to be in. No matter how it feels the moment I’m considering it.

With this in mind, let’s imagine we have a general sense of where it is we’re heading. Whether we’re pretending, or feel like we’re pretending some days, is no matter. By the very fact that it exists, we’re able to discern where we are in relation to it. Thus, we’re able to move towards or away from it. An actor may want to act. A successful actor, knows exactly what they want to act in. How often they want to be acting. They know how much they need to earn in order to sustain their definition of successful actor. This applies to lawyers, carpenters, blog writers, real estate agents, graphic designers, event planners, and any other career choices that require even a modicum of self-reliance.

“It is our choices that show what we truly are, far more than our abilities.”
-Albus Dumbledore

It was this wonderfully mysterious, famous and intriguing silver-haired wizard who worded this idea of doing whatever it takes, the best way. So many get caught up in the details of how they’re going to get to where they’re going. Obsessing over how long it might take and the best way to get there. They suffer from what I (and many before me) call paralysis by analysis. It is your dedication and commitment to the cause that is the most important. Not how you get there.

If you don’t know if what you’re doing is the right thing to be doing, just ask yourself:

“If this is the only thing I accomplish today, will I be happy?”¹