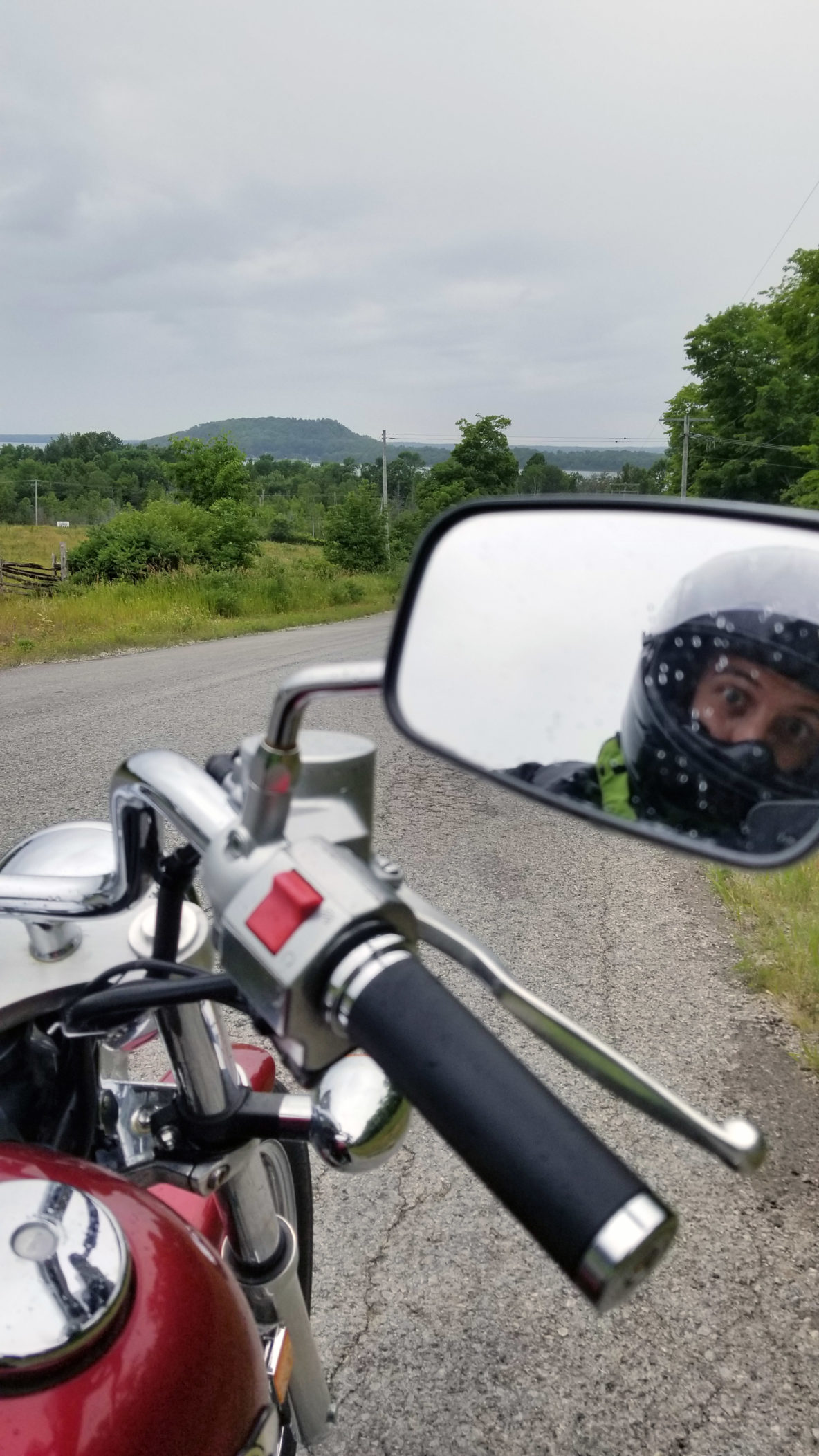 When I was young, I never thought I’d become a motorcyclist. In fact, it was something I quietly dreamed of, but never prioritized. But 5 years ago, that all changed. My oldest brother Kristof suggested we get our motorcycle licences. I was nervous but agreed. Later, my other brother Riley let me try his dirt bike. With some difficulty,

I learned what stopping and going felt like. Together, we went to write our licenses, completed our safety course, and have been riding safely ever since.

Before I was even old enough to sit in the front passenger seat of a car, I vividly remember watching one of my favorite Hollywood stars on the big screen in an epic motorcycle chase scene, in what remains to this day as one of my most beloved action movie franchises ever made…

That is to say Tom Cruise in Mission Impossible 2! The movie features Cruise, helmetless, using a Triumph Speed Triple in an epic chase & duel sequence, late in the film.  The scene is rife with stoppies, wheelies, jumps, and dirt action. This was really the first time I had seen anything like it! This particular cinematic moment remains lauded as one of the top motorcycle action sequences in the history of film.

Why Are Motorcycles So Cool?

Of course, there are many more examples of motorcycles starring on the big screen! Here are a few that come to mind:The Dark Knight, The Matrix Reloaded, Indiana Jones and the Last Crusade and Terminator 2. I still don’t really know what makes a motorcycle so appealing to me, or countless others. Maybe it’s the way they’re portrayed in films, or their skeleton-like yet sleek aesthetic. Perhaps it’s their impassable speed, or just the inherent risk they imply.

For some reason, I think there is a certain rebellious quality about them. In fact, as I write this, sitting on the patio of my local Starbucks, listening to the plethora of fast-paced vehicles passing on the nearby freeway, I can’t help but look up from my screen and smile. In the distance I see a fellow biker approaching speedily. A sort of modern knight, dressed in specialized Kevlar-enforced gear, effortlessly cutting through the wind, as she balances atop her yellow fuel-injected motorized horse. She cuts through space and time swiftly while simultaneously squandering the status quo. F**k yea!

Whenever we think of motorcycles, it’s almost impossible not to think of the startling statistics and horror stories surrounding them. At first glance, the numbers laid out by many sources would dissuade any reasonable person from ever even looking in the general direction of a donorcycle. One article claims that the lifetime odds of dying in a motorcycle crash are a terrifying 1 in 770. While another claims that motorcyclists account for about 15% of all traffic fatalities.

However, not every study is so grim, like this article, where the author uses numbers to paint a much fuller picture. All in all, s\he posits that a rider can drastically minimize their risk, by following certain guidelines. As it happens, most of the latter happen to be laws where I live, so I think we’re in good shape. I ride my bike when I am 100% sober, I (mostly) obey speed limits, I wear a full-face helmet, and the appropriate accompanying gear.

Even so, a few years ago, I read about one of the worst, near-fatal motorcycle accidents to happen in Niagara. The victims were C & L, a couple that I am very grateful to call close friends. They side-struck a vehicle that decided to turn-left in front of them, at 60 km/h. Visiting them in the hospital, left me with strong feelings of reflection, contemplation and at one point even hesitation. About 2 months after their accident, I confessed to C that I was debating ever getting back on my bike after seeing what they’d been through. He took a breath and looked at me in a way I’ll never forget. Everything about him in that moment exuded thoughtfulness, passion, wisdom and love. He said,

Despite being in chronic pain, C & L are probably two of the most positive, supportive and courageous people I know. Those words really affected me deeply. But there is something about them I think of almost daily, their ability to enjoy every moment. This couple’s consistent actions to better their health, practice gratitude and serve others is awe-inspiring. We’ve shared some spectacular laughs and amazing moments over the past few years! I even had the incredible honor of emceeing their wedding, but I digress! Their story hit close to home, but continues to inspire me.

It feels like every week in the summer mainstream media bombards us with stories of motorcyclist fatalities. Yet I still feel weirdly comforted at the sight of my XL helmet perched-up right beside my laptop. From time to time, I’ll glance over at my bike making sure it’s still sitting upright where I left it.

There it sits, its cycloptic headlight glancing back at me. The now cooled-off mass of Japanese machinery patiently waiting to be mounted again. Ready to respond with an uncanny speed and maneuverability. But only as quickly or as slowly as I can anticipate or react to the ever-changing road conditions. The relationship between motorcycle and rider is a sexy one, though hopefully a platonic one!

With this in mind, the act of riding a motorcycle, for me, is an exercise in mindfulness; it is a meditative practice.

“Meditation is a practice where an individual uses a technique – such as mindfulness, or focusing their mind on a particular object, thought or activity – to train attention and awareness, and achieve a mentally clear and emotionally calm and stable state. Scholars have found meditation difficult to define, as practices vary both between traditions and within them.”

In effect, when I’m straddling a two-wheeled machine that is very capable of bringing me great joy and memories but also extreme pain, even death – I have no choice but to give every second spent on that machine the attention and respect it deserves. I choose to remain in the moment, every moment, knowing full well that if I start to think about what I’m going to have for dinner later, or allow myself to get lost in the fantasy arising after noticing the attractive human walking by… I’M DEAD.

Before I embark on any journey, I visualize myself turning invisible, like real magic. Just like the Aston Martin Vanquish, from James Bond: Die Another Day. This way, I don’t just assume other driver’s can’t see me, I know they can’t! Now, when some cell-distracted millennial, or bad driver does the inevitably stupid: I can’t get upset or throw a fit of road-rage. How dare I get upset or offended? Of course they didn’t see me, I’m INVISIBLE *laughs evilly to himself*!

All in all, I think everyone on the road drives for a reason that is ultimately different, even if they share a destination. When it comes to motorcyclists, some might ride them because they were bullied at a young-age. Hoping this form of nerd’s revenge will give them a higher social value. While others might ride simply because it’s what they know, raised around motorcycles and dirt bikes. In fact, guess which A-list celebrity started riding at just 10 years old…? That’s right: Tom Cruise! Personally, riding a motorcycle is a symbol of self-discipline, community, strength, balance, power, respect, responsibility and humility. After all, the 18-wheeler might not have had the right-of-way…but who’s going to win that argument?

Let me know your thoughts about this article in the comment section below!
Do you ride?
Have you ever wanted to?
What’s been your favorite motorcycle trip to date?
What is your dream bike?

Thanks for being here.
-AK